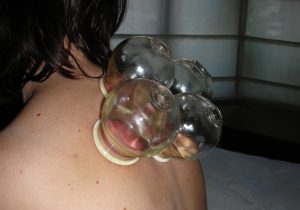 Cupping is an ancient therapeutic technique often used in Traditional Chinese Medicine (TCM) often alongside acupuncture. It involves the sticking of heated glass cups by suction onto the skin typically over areas of muscular pain or tension. It has a similar effect to very deep tissue massage but the effect goes deeper and the benefits usually last significantly longer.

It is not unique to Chinese medicine and can be found all over the world; Ayurvedic medicine (India), Islamic medicine, Eastern Europe and was even used in modern Western medicine up until the early 1950’s . It was popular in Ancient Greece although it first appeared in Ancient Egypt, but probably arose even earlier from an African practice of heating up cows horns and sticking them onto the body to suck out evil spirits that were thought to cause disease.

How does cupping work

Traditional Chinese Medicine (TCM) maintains that health and vitality are the result of uninhibited and balanced flow of ones Qi (vital energy) & Blood. Injuries and trauma cause localised blood and qi stagnation resulting in pain. Stress causes qi stagnation resulting in muscular tension. Cupping strongly moves both blood & qi removing stagnantion from the energy channels, stimulates the internal organs and draws out toxins via skin.

Cupping can be used for general relief of muscular back pain and tension or for the relief of specific problems;

Sliding cupping can be used to treat areas of cellulite. In cellulite the layers of fat containing cells beneath the skin become uneven causing the dimpling effect on the skin. Suction lifts all cells towards the surface smoothing out the unevenness and blood flow is strongly stimulated in the area nourishing and hydrating the cells.

Are there any side effects?

Cupping typically leaves benign red or purplish leave bruise marks on the skin which usually disappear in 4-5 days. If you bruise easily they may last upto 7-10 days.

Not recommended for young children, frail elderly persons, people with heart conditions or on anticoagulant drugs, or people with a lot of moles or scars on the area to be cupped.