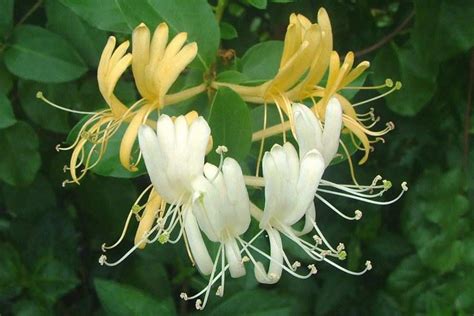 Honeysuckle flowers(Lonicera japonica) or Jinyinhua (Gold Silver Flower) are a traditional Chinese Medicine (TCM) used for the treatment of respiratory infections, including influenza, and has recently been described by some medical researchers as potentially ‘virological penicillin’.

MicroRNA’s (miRNA) are short non-coding segments of RNA found in plants, animals and viruses. miRNA’s are used by organisms to control gene expression by binding to complementary segments of messenger RNA repressing or silencing gene translation.

MicroRNA’s are a fairly recently developed area of cell research of interest because they can switch of cell activity in conditions such as cancer and even high cholesterol. Many miRNA’s are degraded and destroyed by digestion, but some are not and can enter the bloodstream unchanged and eventually reach a target tissue where they can bind to RNA and block gene expression. This may be the biological basis of how certain foods possess anti-cancer properties as well as cast doubts over the safety of genetically modified foods.

In the case of Honeysuckle, MIR2911 it has been demonstrated that not only does it survive digestion intact, but is carried to the lungs where it can bind to Infuenza virus RNA blocking their replication. Specifically MIR2911 blocked PB2 and NS1 receptors which are essential for viral replication. This has been demonstrated in mice, but probably occurs in humans too which would explain its traditional use for treating respiratory viral infections.

Interestingly MIR2911 is not unique to Honeysuckle and had previously already been isolated from Sunflowers (Helianthus annuus), Tobacco plants (Nicotiana tabacum) and Populus euphratica.

Honeysuckle flowers are a key ingredient of a famous TCM formula ‘Shuanghuanglian’ along with Forsythia fruits, and Scutellaria baicalensis root traditionally used to treat respiratory infections.

This formula was recently suggested as a potential treatment for Covid-19 by the Wuhan Institute of Virology on the basis that in vitro the formula killed the Covid-19. Scientific and medical media from outside of China have unleashed a scathing critique of this advice as irresponsible and no better than advocating the taking of sugar water (though still safer than injecting disinfectant!) claiming in vitro efficacy correctly does not prove in vivo efficacy. However the fact that Honeysuckle had been demonstrated to be able to inhibit influenza viruses in mice and that it had been used apparently successfully in treating patients during the last outbreak of SARS it did make sense in the absence of any other viable treatments to recommend the population to use it.

The Chinese government has stated that over 90% of the population in China have already been treated with TCM herbs for Covid19 prevention and control and that over 100,000 packets of TCM formulae were initially sent to Italy along with other medical aid. Sadly it may have got thrown in the bin.

Although China’s successful control of the pandemic could be put down to a number of factors (strict early enforcement of severe quarantine and lockdown rules, wearing masks, etc), we perhaps shouldn’t overlook the fact that if they have treated more than 90% of the population with herbal medicines that this might also be a significant contributory factor worth exploring, especially considering the above mentioned research with Honeysuckle.

Honeysuckle flowers are being used in many of the current formulas being tried out for Covid-19 in China and success is being claimed for its use, although definitive evidence that it can specifically target this virus effectively is yet to be forthcoming. Not surprisingly there seems to be little interest from outside of China to investigate this with all hopes being pinned on a patentable vaccine that will makes billions for its makers. However an effective vaccine may never materialise as Coronavirus’s are the commonest cause of the common cold accounting for 20-30% of colds, and as we all know a vaccine has never materialised for the common cold probably because they mutate to fast. In the past six months Covid-19 has already mutated into four different strains.

Honeysuckle is a vigorous creeper that can be grown anywhere in temperate climates, so it may be a good idea to plant some in your garden!