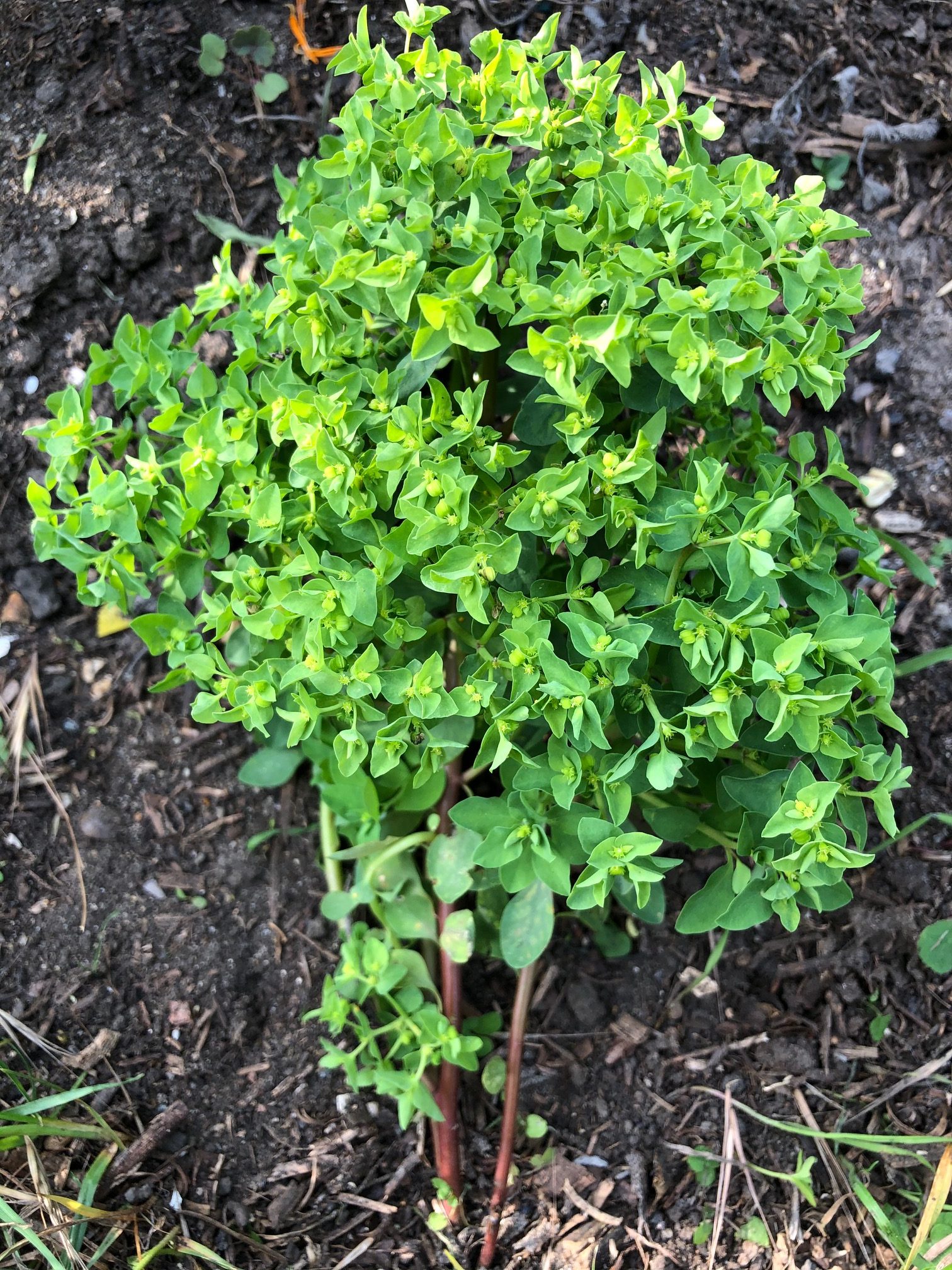 Petty Spurge (Euphorbia peplus) aka Milkweed, Radium Weed or Cancer Weed) is a ubiquitous plant native to Europe, Asia and North Africa, now found as an invasive weed growing on every continent. It belongs to the Euphorbiaceae family, one of the largest plant families (more than 2240 members) some are decorative garden plants, which all contain a toxic, caustic white sap.
This plant genus was named after Euphorbes who was a Greek physician to King Juba II of Numidia (approximately modern Algeria) around the time of Jesus who was said to have discovered the medicinal properties of its toxic sap, including its use as a purgative, hence the common name for this plant family’Spurges’.

In traditional herbal medicine the sap of this plant has been used to treat skin cancers, warts, verruccas, corns and other growths on the skin. The sap of some other spurges are also used in a similar way for treating skin growths eg. Sun Spurge (Euphorbia helioscopia) and the Caper Spurge (Euphorbia lathyris).

Clinical trials have so far supported its traditional use and effecacy.

A study carried out in 2011 by medical researchers in Australia and published in the British Journal of Dermatology demonstrated the clinical effectiveness of this herb for treating non-melanoma types of skin cancer, specifically; basal cell, squamous cell and intra-epidermal carcinomas.
The 36 patients in the trial had either refused, failed or were unsuitable for other conventional treatments. 43% of the patients had failed to respond to other treatments. The response rate to Petty Spurge sap after 1 month ranged from 75-94% depending on the cancer type. At follow up after 15 months it ranged from 50-75%. For superficial lesions it was 100% for intra-epidermal cancers and 78% for basal cell carcinomas. (1)

Analysis of the sap has identified a diterpene ester named ingenol mebutate (PEP0005) as an active ingredient. It is effective at very low concentrations 0.05% of a medicinal preparation.

According to the NCI(National Cancer Institute) ingenol mebutate has been shown to selectively activate Protein Kinase C enzymes which initiate apoptosis (cell death) in some types of cancer cells including melanoma, basal cell carcinoma and myeloid leukaemia cells.(2)

A commercial pharmaceutical gel containing ingenol mebutate has been licensed for sale in the US and Australia for topical treatment of actinic keratosis aka solar or senile keratosis.

Actinic keratoses are pre-cancerous skin lesions caused by exposure to sunlight, so are also known as solar keratoses and because more common with age also as senile keratoses.

In all the clinical trials a preparation of either plant sap or ingenol mebutate was only applied to the skin growths once a day for three days to achieve positive results. Care is required not to get the plant sap on normal skin because of its irritant properties. Once applied to a skin growth the skin surrounding it begins to redden and itch. This dissipates after a few days, the skin lesion then dries up as it’s cells die, scabs and finally falls off leaving healthy skin underneath.

Petty Spurge sap appears to be a relatively safe and reliable treatment for removing various types of pre-cancerous or even some types of cancerous skin lesions without the need to resort to surgery and at least as effective or even more so than other conventional topical treatments.